Following Windows 11's release last month, Vissensa's Technical team get their hands on the new OS and tell you what we think in our Windows 11 review!

Windows 11 was released on 5th October and so far, the upgrade has had mixed feedback. Should you upgrade? Who stands to benefit from the upgrade? Is it worth it? Our Windows 11 review should help you answer all of these questions and more!

Personally, I’m 50/50. I ran the Windows 11 beta download on a virtual machine to see what it was like, but I didn’t really start to use it until I updated two of my 3 main Windows systems – my Surface Pro 6 and my custom gaming rig. I have left my work workhorse on Windows 10.

Let’s start with the interface, it looks great. I have been a Mac user for a long time, and I can see where Microsoft is heading with the new layout. There’s been a major overhaul on the Start Menu. No more Live Tiles (did anyone ever use these?) and replaced with Pinned Apps – not sure I will use these but can see how some users will like them. They have moved the Start Menu to the middle of the dock which will take some getting used to. Some much needed flair has been added to icons in the Start Menu and in Menu Areas. Having Teams functionality embedded is great. I found that everything I need is right there, in my face and I do not have to delve very deep to locate apps or documents. Search has changed. It's still there in the Start Menu however when clicked will open its own UI, a good thing? Time will tell. I know that search is important to a lot of people and so far I have found its integration into the system to be subpar.

Microsoft has simplified this by taking away a lot of familiar features and has not replaced them with anything new. No more Right Click Context Menu bar the Taskbar Settings option. The update to Windows 11 means you can no longer launch Task Manager from here. You can also no longer drag apps to the Taskbar to pin them. The Taskbar is now centred by default and cannot be moved to either side of the screen or along the top, which will annoy a lot of users. You cannot resize items, I could go on. Apparently, a lot of this redesign has come from the Windows 10X project, which was a more simplified operating system, designed for dual screen devices. The simplifications make it look nice, but for me, this new iteration of the Taskbar has been fundamentally crippled, especially for the power users out there.

We have been here before, right? Windows 7 introduced us to Windows Desktop Gadgets, which had been renamed from Windows Sidebar. It was included in betas of Windows 8, but was killed off for its final release. And now the functionality is back. Relaunched and refreshed as Widgets. There’s the default set, Weather, Tariff, News etc. and integrates with Microsoft’s tools so lots of personalisation there. Some of the Widgets, such as News, can be customised to your needs. I use it, sometimes. I have found that it can take up a lot of screen space.

A redesign here too. Some new, fresh icons (there’s the flair I mentioned earlier!) and a new Ribbon more akin to Office. No complaints from me here. I have been able to locate the icons I needed easily. There is a new, OS-wide, Context Menu when you right click that takes a little getting used to. 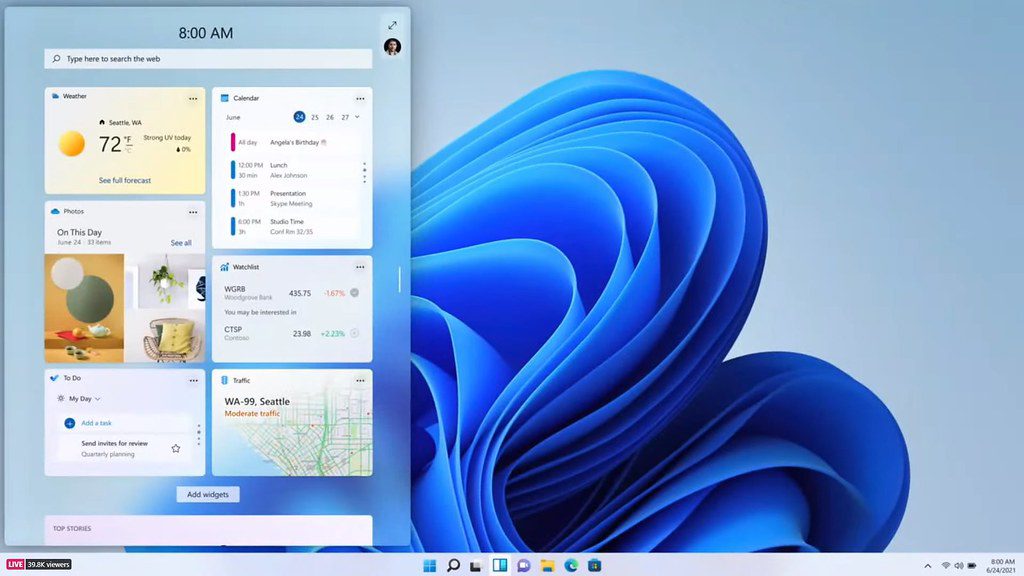 This is a key feature, OS-Wide and very broad so I will just mention the main features. Snap Layouts and Snap Groups (together known as Snap Assist), have come over from Windows 10 Power Toys and enables Windows to snap to different areas of the screen. Locations are presented when you hover over the ‘window’ icon of a window. This functionality has been available before but the new interface makes things a lot easier. There’s also Virtual Desktops. Allowing different backgrounds, icon sets and open windows. Not ground-breaking but very handy.

Although I have discussed UI already, I think it is worth discussing separately, especially because some UI changes are OS-wide. These are mainly rounded corners and updated context menus. The rounded corners are a small but significant change that you will notice when you upgrade to Windows 11. You will notice that many operating system components and applications have been updated to have rounded corners instead of using sharp corners in windows and context menus. In my opinion, they look pleasant and do not detract from the core of using Windows Experience. Some people may not like them, but I think everyone will eventually get used to them, which is not a bad thing. Context menus is yet another element which has received a major overhaul. Context menus now support a ribbon at the top for common functionalities, similar to File Explorer, while other options are neatly grouped below them. However, one thing of note is that some options that contain third-party apps integrating directly with certain file types will not be immediately visible. They are tucked away in the “More options" configuration which will open the legacy context menu. There are other smaller UI improvements too. This includes updated icons and design language across the OS as well as certain Microsoft apps like Clock, Photos, Snipping Tool, and Paint. The modern UI seems to have had a strong focus in the Windows 11 release, but more work needs to be done to make it consistent across the entire OS.

Right now, Teams integrations offer a flyout UI directly above the taskbar when you launch it, and from there, you can communicate online with your colleagues, friends and family. There are some other issues with this Teams integration too. Chat windows currently do not support Snap Layouts – even though it's an OS-level functionality. The context menus are barebones, the UI is unintuitive, and frankly, quite buggy. Not to worry though as the Teams app is still available to use and personally, I will be sticking with that one.

The digital store has been redesigned from the ground up, giving a new experience across each page within the store. The Windows 11 store has some new effects and animations when you interact with certain UI parts of the Store. The Store is far from perfect, but Microsoft is on the right rack with this. The Store has been opened to work with other browsers and storefronts, it accepts all applications as well, regardless of the technology or framework used to develop them. So, app developers can use Java, .NET, React etc. directly to the storefront and manage the apps updates. And with revenue-sharing policies, the Store has the potential to become a major player.

I wanted to flag this as I feel it's going to be a real pain point. Prior to the Windows 11 release, it was possible to use the Default Apps Settings to change which apps are opened for email, music, web links etc. This function has now gone in the Windows 11 beta download and beyond. You now need to set these manually, for each & every file type or extension. Which is a real pain. So anyone that utilizes lots of 3rd party apps for certain files needs to be aware of this.

With my gaming rig, I was really looking forward to DirectStorage where your GPU will be able to address SSD Storage without going through the CPU. So, after a few days of running Windows 11, I thought something was up. I was getting slower frame rates and general jumpiness within my FPS games. I thought it might have been my mouse. But in fact, it turns out that as per this AMD Support Page (https://www.amd.com/en/support/kb/faq/pa-400) it is a confirmed issue, which should be resolved by some updates – which I have yet to install. Fingers crossed these updates help. Then I can really hammer the gaming side. 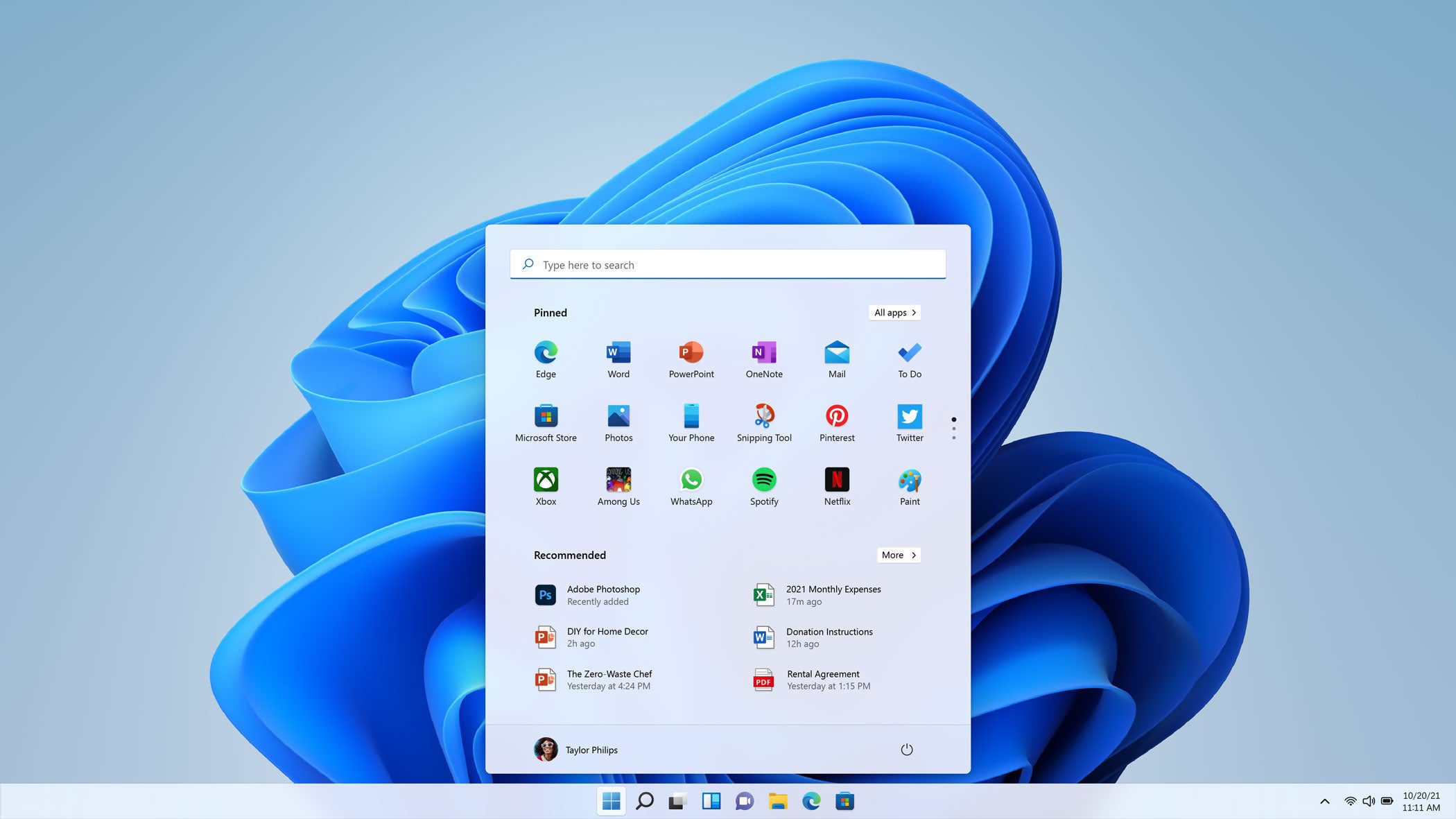 I was really looking forward to the Windows 11 review. You can safely take away from what I’ve said above that I love the advanced UI configuration, the new Microsoft Store, and other enhancements. But there are a few things that I can’t overlook. Glaring instances of this is the crazy & shoehorned execution of Microsoft Apps, the terrible Taskbar, and the default applications settings. There are also issues around advances in Gaming tech, that do not yet work.

I understand that a lot of these things will improve with time, yet I just can’t resist the urge to feel that Microsoft rushed to meet a self-set deadline we don’t know about, yet. You can’t simply overplay Android application support when you disclose the OS on June 24 and afterwards and arbitrarily conclude that you’re not going to make it accessible with general delivery on October 5.

Don’t get me wrong, there is stuff to like here. As I’ve said already, I truly like the advanced UI, style, and symbols. I don’t object to the centre taskbar or the troublesome Start menu. Yet individuals truly should be given more choices when they’re using something as large as an OS. You can’t simply eliminate functionality left and right for the sake of rearrangements and expect that everyone should just take it.

All things considered, the issue right now is that with the shortfall of a champion component like Android applications support, A Windows 11 compatibility feature, it feels like a re-skin of Windows 10. The re-skin is great however, is it something that you should move up to quickly? Not at all. The Windows 11 update has some great ideas but required more time in the oven. I’m not sure why Microsoft chose to surge an OS update that doesn’t have its promoted highlights as a whole yet. And surprisingly the included elements lack standard functionality.

Tragically, the Windows 11 release is simply one more passage in Microsoft’s book of “deploy first, fix later". It’s not awful, but rather it’s not extraordinary right now by the same token. There’s a great deal of potential here; simplification of UI is not a horrendous idea, however, having it there in a silly way doesn’t actually make for a great client experience. This initial Windows 11 release will without a doubt improve with time, but did we truly require an OS update before the essential functionalities were finished? I don’t think so. Right now, Windows 11 is little more than a re-skin. It is not necessarily the case that the OS won’t ever be genuinely extraordinary, it simply wasn’t prepared for primetime just yet, in this commentator’s viewpoint.